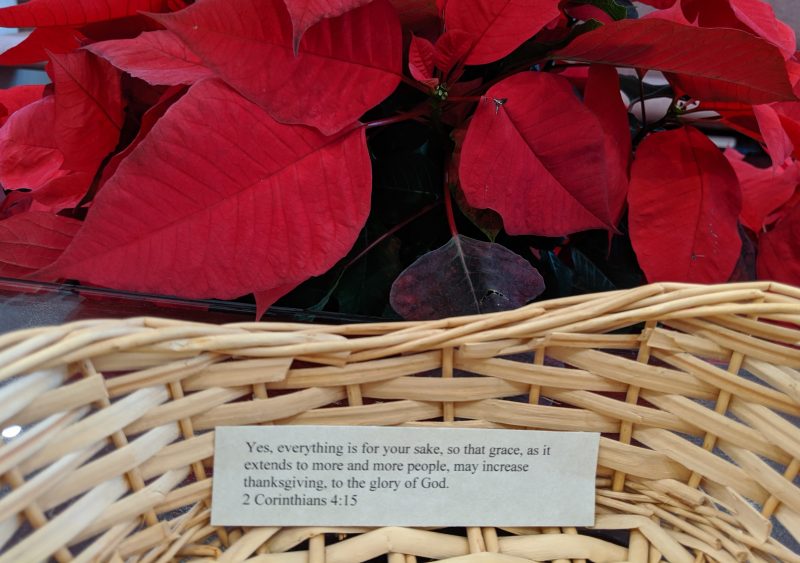 On Sunday, December 29, 2019, ushers distributed baskets of  “watchwords” for 2020 to those in attendance. Pastor Barry invited everyone to select their own personal “Watchword” for the year. He selected the following text for the congregation.

“Yes, everything is for your sake, so that grace, as it extends to more and more people, may increase thanksgiving, to the glory of God.” – 2 Corinthians 4:15

A Note from Pastor Barry about our 2020 Watchword

It is accepted among New Testament scholars that St. Paul’s longest ministry relationship is with this new Christian congregation he started in Corinth. Today, we have two surviving letters that he wrote to this congregation. Biblical scholars have noted that within these two letters are references to five letters that Paul wrote to them and one that the congregation wrote back to Paul.
Archaeological scholars have found fragments of three of those five letters.

The city of Corinth is within 50 miles of both Athens and Delphi – the religious centers of ancient Greece. To think that it was a difficult place to plant a “new religious community” is an understatement. Not only is Paul “re-defining” Judaism and the prominence of the Torah, he is also presenting a new idea of faith in “God’s Messiah” – who is none other than Jesus, a lowly traveling rabbi who gathered a following for his cause of bringing in a new “kingdom” or new “understanding of God’s intent,” and was falsely accused, condemned, and crucified. Yet, he came back from death and inspired his disciples to continue the cause, and even appeared to Paul and commissioned him to go spread this new religious idea to the Jews who would hear and accept it, but mostly, Paul saw his mission as the messenger to the Gentiles (in this case, Greeks) who would embrace God’s mighty work of redemption for humanity through Jesus, his Messiah.

Earlier in chapter four, Paul describes his own troubles and sufferings as an accepted part of his calling. He infers this because he saw a connection with the sufferings of Jesus. And yet, for Paul,
it is through suffering, it is through weakness, it is through risking one’s own future for the sake of the “cause” that God’s grace is received.

Here in chapter four, verse fifteen, we have Paul’s affirmation that those who enter into this endeavor of bringing the gospel of Christ to as many neighborhoods as possible, will experience this
result: Yes, everything is for your sake, so that grace, as it extends to more and more people, may increase thanksgiving, to the glory of God.

It seems that extending grace to more and more people is our calling. This is the essential purpose. All others are ministerial – important for fulfilling needed tasks – but not our main goal.

The Tradition of the “Watchword”

The roots of this long-standing tradition go back to the Renewed Moravian Church, a small group of refugees forming their own community of faith on the estate of Count Nicholas Ludvig von Zinzendorf, a Saxon nobleman.

On May 3, 1728, during the evening service, Count Zinzendorf gave the fledgling congregation a “watchword” for the next day. It was to be a “Losung” (watchword) to accompany them through the whole day.

Thereafter one or more persons of the congregation went daily to each of the 32 houses in Herrnhut to bring them the watchword for the day, and engage the families in pastoral conversations about the text.

From this oral tradition, the Daily Texts soon became fixed in printed form. Zinzendorf compiled 365 watchwords for the year and the first edition of the Losungen was published for 1731. Now printed in over 51 different languages and dialects and with an annual press run of nearly one and a half million, the Daily Texts is probably the most widely read devotional guide in the world, next to the Bible itself.

“The watchword is either a promise, an encouragement, an admonition or word of comfort; the doctrinal text contains a point of revealed doctrine.”

By 1812 it was established that all watchwords would be drawn by lot from a selection of Old Testament texts, and the doctrinal texts would be selected from the New Testament. By the end of the nineteenth century, the custom was established to relate the two texts in theme or thought.

Over the years, congregations began a tradition of distributing scriptures for people to select their own personal watchword (a scripture to guide or inspire them through the year) during the Watchnight (New Year’s Eve) Service or at a service held near the first of the new year.